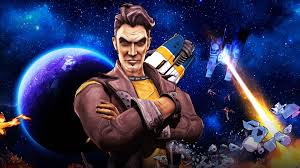 Finally, the Destiny spell has been broken & who could do it better than 2K & Gearbox?

Borderlands The Pre=Sequel has it all: Four player co=op, epic weapons, interesting characters with actual personalities and names, a terrific sense of humor AND a storyline. Seriously, there is nothing I have found to complain about with this game.

First of all, I feel I must give kudos to 2K & Gearbox for giving gamers not one but TWO female characters to choose from straight out of the box. We have come a LONG way, baby, in getting lady gamers not only recognized but respected as relevant in the genre & the developers of Borderlands should be highly commended for “getting” that. Well done, well done!

In this edition of the Borderlands saga, you play alongside Handsome Jack and find out how he went from just another good guy to the notorious villain we all love to hate. He helps you to escape Pandora by sending you to the moon, which of course if being ripped apart by Lost Legion soldiers and  random degenerates. The excitement begins with the first spin of the disc. There are four classes of “heroes” to choose from: Athena, The Gladiator, Willhem, The Enforcer, Nisha, The Lawbringer, and Claptarp, The Fragtrap. Each character class has its own special skill class and three different skill trees to climb, depending on which abilities you wish to perfect.

As a huge fan of the Borderlands & Borderlands 2, I was a little taken back at first by the non-gravity, non-oxygen environments one encounters. It took a little getting used to but once I did, I found that it only adds to enjoyment of the game, especially being able to pull off astounding jumps and shoot from the air, not to mention the ability to ass slam opponents. But please, let me set the stage…..

~ I began my adventure by playing as Nisha, The Lawbringer. She is cool, cute, funny and she will melee bandits with a badass bullwhip. Her “special” is called Showdown, which auto aims enemies and temporarily raises gun damage, fire rate, reload & bullet speed and reduces recoil.  It is extremely effective. We first met Nisha in Borderlands 2, as an enemy to dispose of. Being able to play as her gives interesting insight into her psyche and exactly what makes her tick. She is as bloodthirsty as ever and her insights on life will leave you ROTFL. She is loads of fun!

At the moment, I am playing an add-on character, Lady Hammerlock, Aurelia, the Diva. She happens to be Sir Hammerlock’s much hated sister. For those of you who have played Borderlands 2, you will remember Hammerlock as the scientist/researcher type who sends you on several missions, usually involving something like skag poo or robotic eyes. Aurelia makes her first appearance in the Pre Sequel as his jet-setting, aristocratic sister who is heir to the family fortune & whose heart is as frozen as the enemy bouncing shurikens she doles out. I am thoroughly enjoying this character & cannot wait to delve deeper into her narcissistic persona.

Guns, guns, guns! Borderlands has them all. From regular, everyday bullets to those that cause explosive, fire or ice damage. Throw lasers into the mix and this game becomes an online shooter’s sweetest dream. Tired of walking through Borderlands? Climb on a Moon Zoomy with your co-op buddies or ride solo on a Stingray. Want to trade items with a friend or give them that awesomely cool class mod you’ve found but can’t use? No problem with the in-game trading system. Want to give your character a new look? Belly up to the New You Station for alternative skins and heads. Want to try a different avatar? You have the ability to have up to eight different character saves without losing any game progression on any of them.

In my opinion, everything about this game is spot on & I, for one, am loving it! The developer’s formula of a strong storyline, 4 player co-op, interesting characters, badass weaponry, a wicked sense of adult humor & sarcasm and plenty of DLC coming down the pike makes this game a must have for anyone who enjoys an online shooter.

Let’s get to shootin’ & lootin’, Vault Hunter! Cya on the box!